This has been in the planning with community consultation since 2017.  For full details visit CoM Participate Melbourne website

Late in 2019 a heritage permit was refused by Heritage Victoria.  The CoM requested a review of the refusal and A decision was made by the Heritage Council to overturn the heritage permit refusal. A Permit has now been issued with conditions.

The City of Melbourne have released their draft plans for some improvements to the Pasley Street Entrance to the Park. The plans are currently before Heritage Victoria at the moment. Submissions may be made if you have an issue with this proposal.

By admin Heritage, Planning No Comments

There are plans to demolish two Edwardian apartment buildings at 93 – 103 Park Street and replace them with a modern building. The MSYRG along with several local residents have banded together to fight this proposal and the image above shows the revised proposal from the developers. As you can see it retains the St Arnaud facade and some elements of the older building to the north (on the right in picture). The developer is arguing for the demolition of this older building on the grounds it is unsafe and irreparable. We continue to oppose its demolition.

Click here to view the original objection prepared and lodged for us by Sandra Rigo from Hansen Partners.

By admin Planning No Comments

The owners of 157-159 Domain Road have applied to change the use of the building from apartments to a hotel. We have opposed their liquor licence application for the rooms and balcony. 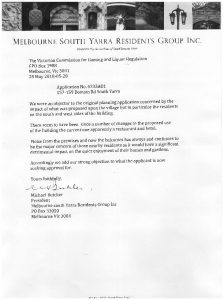 By Secretary MSYRG Local Government, Melbourne City Council, Planning, State Government, Uncategorized
Readers will recall that when the State Government announced a review of the Local Government Act and City of Melbourne Act we lodged a submission in December last year requesting an urgent review of the law relating to the forthcoming City of Melbourne elections to be held in October this year.
The City of Melbourne has its own, unique, Act that governs the way that the COM operates. The Local Government Act covers other non-COM councils.
The MSYRG said we did not want a repeat of the 2012 elections when Mayor Doyle and his team received over $400,000 in donations from property developers and others with the resulting taint of undue influence and corruption.
The usual outcome of this large scale conflict of interest by Doyle ticket councillors is that a quorum at important planning meetings is not achieved because those on the ticket have had to remove themselves from participating in the matter they are conflicted upon. This has the effect that rather than the matter being deliberated by councillors, supported by submissions from members of the public at an open meeting, a relevant planning matter is dealt with administratively behind the scenes by officers of the City of Melbourne. Open discussion is effectively stymied and untoward outcomes ensue.
Ratepayers expect that Councillors will do their job and contribute in a fair and equitable manner to critical council meetings and not be struck out because they have accepted donations from entities that are seeking planning approval from the COM.
Despite further requests from us particularly following the reported offer by Councillor Ong to pay the Lord Mayor $200,000 to be part of his team at the coming elections, nothing has been heard from the Minister for Local Government.
We were eventually able to arrange a meeting with the Minister’s senior local government adviser where we again pressed for change, including to the law relating to donations, but it is now clear no change will be made in time for the 2016 Council elections.
Attached is our further submission relating to proposed changes to certain regulations relating to the coming elections and our letter to the adviser following our recent meeting.
We have also been attending Council meetings that allow questions from members of the public and have been pressing Lord Mayor Doyle to refuse donations from property developers and to to disclose all donations as they are  received. Doyle has refused to provide assurance that he will not accept developer donations and and his responses to this important matter upon direct questioning have been sadly inadequate with much ongoing deflection of central arguments relating to clear and transparent processes.
Our letter to the Minister for Local Government can be found here – Hutchins
Our submission to the State Government re changes to the Local Government act can be found here – SubmissionToStateGovt5-5-16
Love0

The Andrews Victorian government has commenced a review of the residential zoning law introduced by the previous Liberal government.

The existing law introduced by Mathew Guy, and in particular the new Neighbourhood Residential Zone with its mandatory height limits, provides us for the first time a solid basis for preventing inappropriate development in our heritage areas.

It is essential that the certainty afforded in the Guy review is not lost or watered down by the new review.

By Secretary MSYRG Planning
The review of the City of Melbourne heritage policy is about to enter the public phase that will in due course lead to an amendment of the current planning scheme.
The MSYRG committee has reviewed the draft policy and attached is our submission to Council.
We believe the draft is deficient in a number of ways and that the review does not go far enough to protect our remaining heritage areas.
Our submission discusses those deficiencies, sets out the additional work that is so essential and requests that this amendment to the planning scheme be postponed until this further work has been done.
Our submission to the City of Melbourne relating to the Heritage Policy review was lodged on 3rd March 2016 – Click on the link immediately below.

The City of Melbourne has published it’s long awaited draft Heritage Policies Review which will voted on next Tuesday December 8, 2015.

Link to the Report.

Members are encouraged to review the documents and forward any comments to the executive. Member are also encourage to attend the meeting next Tuesday, Town Hall, Swanston Street

1. The purpose of this report is to advise the Future Melbourne Committee of the outcomes of the Heritage Policies Review (HPR) and to seek the Committee’s endorsement to request the Minister for Planning’s authorisation to exhibit Melbourne Planning Scheme Amendment C258 Heritage Policies Review.
2. The HPR, together with the associated draft amendment C258, is  a 2015-16 Annual Plan initiative and addresses three actions in Council’s adopted Heritage Strategy 2013.
3. In July 2014, Council sought comments from the community on its discussion paper ‘Review of the Local Heritage Planning Policies in the Melbourne Planning Scheme.’ This work identified that the current heritage policies need updating, that statements of significance needed to be created for existing large
scale precincts and that the A to D grading system needs to be phased out.
Love0 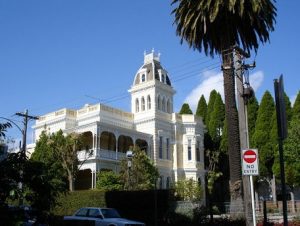 Residents  have submitted an application for an appeal which is listed to be heard on April 11, 2016 at 55 King Street Melbourne at 10:AM.  The matter is now set down for a 5 day hearing

Statement of Grounds for  Appeal

After two years of deliberation the City of Melbourne (COM) decided on 1 September to ignore the residents extensive objections and submissions in relation to the planning application for this site. The objections were supported by reports of relevant experts. This was manifest by the COM issuing a notice of decision to grant a permit to Christ Church Grammar School to operate a primary school in the Victorian residence on the corner of Toorak Road West and Leopold Street.

The Councillors who approved the “Goodrest” planning application were;

Those who opposed the “Goodrest” planning application were:

It was an extraordinary decision for a number of reasons and another meeting where once again, ratepayers and their interests were treated by several councilors in a discourteous manner at best and with disdain at worst. The meeting was conducted in a manner such that most presenters were not given the opportunity to respond to questions and at times facing some councilors who were talking amongst themselves and not concentrating on the presentation being made.

1. For two years council engineers and planners have been considering and rejecting the school’s application and the school has been making and amending its submission.

2. This rejection was chiefly because of the difficulty in dropping off and collecting 170 young children and the enormous impact that would have on traffic and parking in that already busy part of Toorak Road. The impact would particularly affect local residents in Leopold Street which is unidirectional towards the school and very narrow.

3. For two years local residents have been objecting and submitting expert traffic reports explaining these difficulties in clear terms.

4. Then, within the past few weeks, the school amended its application once again by removing two pedestrian gates in Leopold Street and, to our surprise, negotiating with VicRoads for the provision of five additional parking places on the SOUTH side of Toorak Road outside the Senior Citizens building – approximately 240 metres away. A substantial walk for young children (some pre-school age) and requires crossing an arterial road. There will be additional competition for those new spaces by the pre-existing kindergarten at that very location. It is difficult to fathom that this practically irrelevant provision tipped the Council engineers into support!

5. The removal of the gates does not change the fundamental, and in our view, unresolvable, traffic and parking problems and neither do the additional parking spaces that are unlikely to be used because of the danger of getting young children across the busy road.

6. Nevertheless, for reasons that are in our view unsustainable and unexplainable these two additional and irrelevant changes were enough to persuade those engineers and officers to completely change the view held for the previous two years and recommend approval of the application notwithstanding that in their evidence they were far from confident about the outcome

7. As the officer’s report made it plain that it was these two changes that overcame two years of opposition, an understanding of this and the history would lead any responsible body to the inevitable conclusion that these changes were irrelevant, that the recommendation should not be accepted and that the application should be rejected on the basis that the use of the property for this purpose was unworkable in this residential area.

Over 50 residents attended the council meeting, all except 2 of whom where objectors. Fourteen objectors made verbal submissions. As has been the case on previous occasions, several councillors paid little attention to residents making their submissions and generally gave every indication that what residents were saying was of little relevance or interest to them.

There is an expectation from ratepayers and those presenting at such a meeting that councillors will remained focused and attentive to the task at hand and that chatter between councilors, moving about the room and interacting with portable communications devices is prejudicial to the satisfactory performance of that duty. .

When the offending councillors did have the opportunity to speak to the meeting, it was not to deal with the critical traffic and parking issues but to raise irrelevant issues or make a disparaging remark or implied threat about losing resident parking rights if their opposition went any further. Local residents were justifiably concerned about the issue, had given the matter substantial thought and responded carefully. Regrettably however, several councillors treated them disgracefully.

Residents left the meeting unhappy and angry not just about the decision but about the dismissive and discourteous way they and their views were treated. While the Mayor regularly warns those in the audience about treating speakers courteously, the same rule seems not to apply to councillors.